Let me start by saying that I am sorry. It has been exactly two weeks since I last posted something, something that was only a simple preview post on the spring 2012 season. The truth is that school has been getting in the way and naturally that is my main priority, as it is my last year in high school. In the little free time I have, I want to take a breather, so sadly blogging has been put a bit on a hold. It is the first time I have felt this stressed and there are a lot of things going on emotionally because of it. No, wait, that sounds worse than it is. In any case, I am starting to feel a little better and will do my best to continue with roughly a post per week!

…Oh, and before I forget, let us get to the actual post! Just click the fancy “Continue Reading”.

Video games, the wonder of today. Even though it is in its early stages, we see some truly experimental titles out there, showcasing not only creative gameplay, but also new and different approaches to storytelling unlike what any other medium is capable of. Video games are unique in that aspect, as it has no real limits of telling stories, since you, the player, are mostly in charge of what is happening. The story could be long and ambitious with battles every now and then, such as any JRPG, or short and different, like Bastion and its real-time narration. Because the way of telling a story is so different, it is very hard to do a proper adaptation of a video game. Or, at least, that is what I think, which is why I try stay away from those adaptations in anime as if they were the worst thing ever created. And this is all because of me having a slightly unjustified prejudice against them. As for why I have this prejudice I cannot say, as there is no particular reason besides me believing they will always fail to properly adapt the stories. 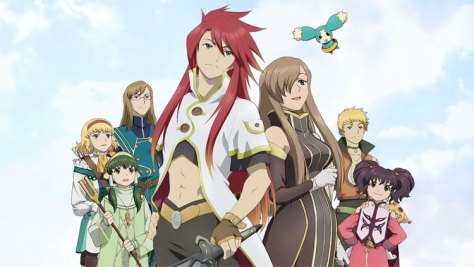 Not too long ago I finished Tales of the Abyss for 3DS (also out on PS2), a wonderful JRPG with a surprisingly engrossing story, lasting for a good ~60 hours. In fact, it was so absorbing that I was eager to check out its anime adaptation, if only to spend more time with the lovable characters. But before I let my feelings completely overthrow me, my brain came to the most rational conclusion: the anime would most likely suck. How would a long and huge game, with lots of battles, fetch quests and more, be able to be good as an anime? Even if they removed the aforementioned battles, the fetch quests would have to be included somehow, as they are an integral part of the story. But that would be dull. And if they were removed, the story would not work. But, and, and, but, but. So I reached the conclusion that it would suck. It would be impossible to adapt it to a satisfying degree.

But, yet, here we have the currently ongoing and appreciated series called Persona 4 and Amagami SS+ Plus. To further add successful video game adaptations, we have every visual novel by Key, including the widely acclaimed masterpiece Clannad. Why not add The iDOLM@STER to the group?

Not that liberal, though.

The thing they all have in common, I believe, is called liberty. While I cannot utter anything about Persona 4, as I have not watched it, I hear it is not trying too hard being the same thing as its video game counterpart. As for the rest of the mentions, they are liberal adaptations that, while staying true to their roots, do their best to function as an actual anime.

Amagami SS+ plus? Restart the story with a new heroine instead of making it a harem fiesta! Clannad? Only focus on one heroine, while giving backstories to the other characters! The iDOLM@STER? Create a series based on the concept of young idols!

Thanks to them being liberal, they result in enjoyable series. Taking what makes the video games good and only focusing on that, makes video game adaptations work in the end! So if it is possible to adapt Persona 4, a game with a lot of content, then surely you could do the same with Tales of the Abyss.

So here I am, having proof shoved in my face telling me it is safe to give the Tales of the Abyss anime a try. But I cannot let go of the feeling that it will suck. This is precisely why it is called prejudice: unreasonable beliefs.

Do you also have any prejudice regarding anime?