Let us skip the long introduction and get straight to the point: this post features anime worlds I would like to live in. Or, actually, it does not have to be worlds I would like to live in, but rather borrowing certain aspects from the mentioned worlds and putting them in our own. It is kind of like merging our own world with an anime world. Why not steal a character or two, or being able to “lift” as in Eureka Seven? So this post is divided into two sections: “World” and “Character”. You will understand when you read it!

Oh, and before I forget: the list is published without any particular order.

That is right, .hack got something I adore. Something that I have longed for ever since I heard of the concept as a kid: virtual reality. The .hack franchise centers around a video game called “The World”, a MMORPG which you can discover at your own, as if it were reality. You just put on a HMD (head-mounted display) and use a gamepad for controls and that is it. No longer is there a distance between you and the actual game world; you are one with it. You fight, interact, socialize and so much more as if it were an alternate reality. Who would not want that? Just watch .hack//Quantum (trailer) and come back once you are finished. You will also long for virtual reality afterwards.

The cool part about this is that it might become a reality soon. Sony has developed a 3D HMD called “Personal 3D Viewer” which you can read about HERE, or, even better, watch a video of HERE. 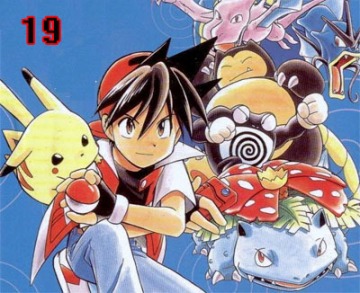 When you are ten years old, you can embark on your biggest journey, traveling through the world in search of wacky monsters with the goal of becoming the best trainer there is. Now, I doubt I would leave my house that young (who would!?), but who has not dreamed of this since they first stumbled upon Pokémon? Adventuring alone, or with your friends, raising a team of wonderful monsters that only belong to you… it would be fun.

There is a reason I choose Pokémon over any other adventurous franchise and that is because it is safer. Sure, Team Rocket might come and try screw things up, but their Ratatas would be nothing against my Wynaut and Marowak. But, who knows, perhaps a hungry Charizard will come and chew on me? Whatever, I just want to adventure with cool monsters!

K-ON! or Kimi to Boku

Also called: “random slice of life series”. Pretty much every slice of life series have something I love, so it was hard to narrow it down, but I eventually made it. These two series are about a group of people (as always with slice of life), with K-ON! focusing on five girls and Kimi to Boku on five boys, enjoying everyday life. In other words, it is ordinary and very trivial. On the other hand, that does not mean it is boring. Actually, it is far from.

K-ON! is the more lively one with our group doing a bunch of random stuff, such as going to concerts or even traveling to London. What the series excelled in was to make the viewer feel at home, as if he or she was one with the group. It was as if you experienced the events in the series together with the characters! I recommend you to read an excellent post on this matter. HERE is it.

In contrast, Kimi to Boku is much calmer. There are no exaggerated reactions, no screaming, no nothing. A lot of people claim this is boring as heck and in no way mirrors reality, which might be true. But, let me be honest here, this is how I would like reality to be. I would fit in perfectly, being calm and all that. Natsume Yuujinchou is another series featuring calm boys which also clicks with me. The world needs calmer boys. 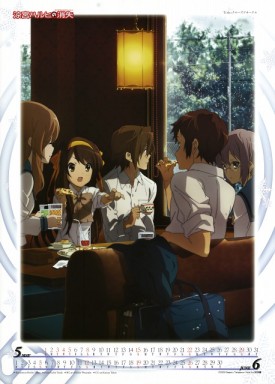 The Melancholy of Suzumiya Haruhi

This is a total opposite of the series mentioned above. The reason for wanting to live with the characters from this series is simple: it would be fun. Because I am so calm, Haruhi and her gang might be exactly what would bring a spark to my calm life. It is energetic without being too over the top, while featuring enjoyable characters which would ensure that the crazy situations would never become annoying. People often say it would be a pain in the butt to be dragged around by Haruhi on her hijinks. I say it would be the total opposite. 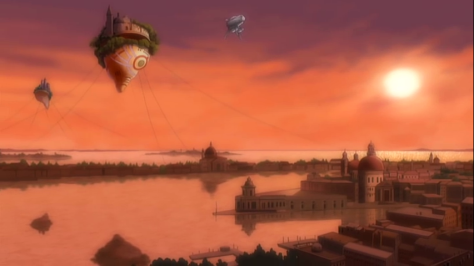 Imagine a place where time stands still. There are no conflicts, no hate, nothing bad at all. It is a world full of happiness, peace and sheer beauty. When you wake up in the morning, you are greeted by lovely sunshine and water. This particular day, it is the annual flooding called Aqua Alta, a day on which the city of Neo-Venezia has come to a standstill. Instead of being bothered by this, you feel joyous and happily put on your rubber boots, walking outside on this very sluggish day. You take a walk to the San Marco Square, experiencing yet another beautiful day. Once there, you meet up with your wonderful friends and enjoy life.

Aria is a utopian series. It is a utopia we all should strive after. Experience Aria and do your best to make it happen. The world literally needs it for peace’s sake.