This post contains thoughts regarding Eureka Seven AO’s second opening and points out the homages to the original series. In other words, unless you have watched the original Eureka Seven, the movie and up to episode 14 of AO, stay away from this post.

When I first heard BravBlue, I instantly thought of Days. They are just so similar. The beginnings of the songs are essentially the same, being long and letting the instruments do their thing. Then the first verse kicks in slowly, before changing pace during the bridge, only to later even share the same iconic transition to the chorus of the song. Both songs are structured in nearly the exact same way.

Basically, FLOW decided to make a new version of their old classic hit. Only this time, however, it does not convey a feeling of adventure and youth, but instead destiny and despair. BravBlue is anti-Days. J-Rock vs. J-Pop, if you want to. And since the two openings are so similarly made, they are nearly interchangeable.

As a bonus, here are three videos which work as a comparison:

This is Youtube, though, so the videos may not stay up for too long! If they are removed and you still want to watch them, just give me a shout in a way that fits you.

Thoughts about the Opening

Currently, Naru is a bit of a wildcard. She tags along with Truth, the one who acts as an antagonist, gets mad at our main character and does not care the slightest if people around her die. While the reasons behind her actions are yet to be explained, they are most likely related to Scub Coral, to which she wants to take drastic measures to protect. As for why she is with Truth, a Secret, the entities that attacks the Scub Coral, beats me.

What we do see in the opening is sadly nothing new. She still has these weird things above her ears, only reminding me of Neon Genesis Evangelion. Furthermore, she is shown to physically be able to ride trapar. Is she becoming a Scub Coral herself, or something closely related? It was revealed that she has Scub Coral in her body, which caused her to have breathing problems. Now that she, as she herself claims, has seen “the truth”, this is no longer a problem. Has she accepted that she is not human…?

Here, we are introduced to the main cast of the series. We have the members of Team Pied Piper presented in a, in my opinion, slightly silly fashion. Their heads pop up in a bright and sparkly yellow background while gazing at something.

This comes off as so silly to me, that I cannot help but feel like there is something genuinely wrong with it. It is as if they were introduced this way to create some sort of otherworldly mood, as if something is not right, a theme that has been frequent in AO and its search for ”the truth”. Whenever I see this part, I think to myself: “they cannot see this world’s truth and are instead surrounded by sparkly lights, aka the fake world” or something along those lines. 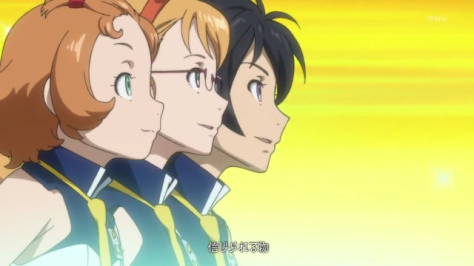 WHAT?! WHY IS TEAM GOLDILOCKS THERE?! THEY HAVE BEEN IN THREE EPISODES, HAVING EXTREMELY MINOR ROLES AND HAVE NEVER AMOUNTED TO ANYTHING. BEGONE, CHARACTERS OF STUPIDITY!

Meet Truth, the humanoid Secret with superpowers who is obsessed with finding “the truth”, hence his name. Now, what we do know is that he is, in fact, a Secret. During Eureka’s first visit in AO’s world, she fought the Secret seen in the background of the picture. Not being able to the extract the Quartz in time from the Scub Coral, Eureka was forced to do some magic which created an explosion and, probably, sent her back to her own universe.

Although it has yet to be fully confirmed, it is safe to say that this explosion somehow made the Secret become humanoid, resulting in Truth. It has been shown that Truth can use the same powers Secret have, or, more exactly, the very same powers the Secret in the picture has. Add the fact that Truth is obsessed with Eureka and appears in the same picture as that Secret, it becomes very clear about who he is. His motives? Being crazy and shit Beats me.

Ao sees Eureka who has arrived to save the series. EUREKA I say.

Excuse me, I think I just fainted. It is indeed Renton. He shares the screen with Ao and Eureka, who else could it be? The hair is also brown, the same color Renton had.

But… look at him. Renton looks cool? He got mad scientist gloves? His hair is two-colored, brown with some white in it? O boy, I cannot wait to see Renton for real.

Or, that is not Renton at all. I have a better suggestion. It’s our Galactic Pretty Boy dazzling the stage all the way from Star Driver. He is merely waiting for the best chance to apprivoise his libido and save us from the pinch that is AO. I mean, look at this: 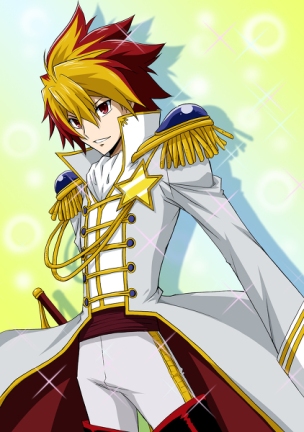 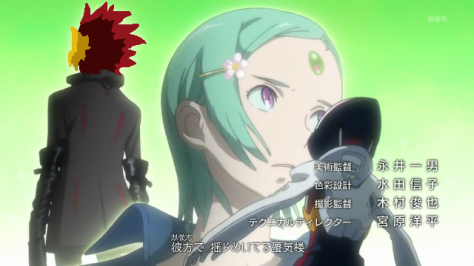 These are three new IFOs that have not been revealed so far, but the chances of them belonging to Team Harlequin are big. Why? They are in space. And for some reason, I get the feeling they are up to no good.

Go and chase imaginary teddy bears or something, Team Goldilocks.

Is that some sort of weapon attached to Mark 1’s right arm? Why is it near the Scub Coral? Is Ao going to attack it? This one really leaves me wondering.

If Renton was the most hype-inducing moment in the opening, then this is the most WTF-inducing one. At first I fell for the trick that this was Nirvash Spec-V, the final form of Nirvash in the movie. Upon a closer inspection, however, this has turned out not to be the case. At least, not entirely.

This mecha is clearly very reminiscent of Spec-V in its shape, but as you can see in the picture above, it is not exactly the same. As a result, many have shrugged it off as simply being something else than Spec-V, because, why would studio Bones even think of letting the “atrocious” movie touch the series?

I disagree with this. Even though this mecha does not have the same physical attributes as Spec-V, it obviously has the staff and the flying orbs. But why does it look so different, then? It could turn out to be a new form of Nirvash, or, if you want to take a wild guess, Truth as Nirvash. Why Truth? Look at those blue spheres the mecha has in its body. Those are the same type of blue spheres that appear around Truth’s stomach.

Is AO confusing? Yes, yes it is. And I am only touching the issues found in the opening. Which Nirvash is this exactly? One could easily come to the conclusion that, yes, this is the Nirvash from the movie, especially since the movie’s Holland sees the world from the original series at one point. But this contradicts the fact that this Nirvash arrived together with Gekko-Go, the ship being in the exact same condition as in the very final episode of the original series. But, wait, did not Nirvash transform into Spec-3 and disappear in the final episode?

And so it continues. The timelines (or dimensions) are messy and if AO manages to unravel everything in a proper way, it deserves much praise. As for Nirvash, anything goes. Perhaps Renton only added the lasers later. Or Truth did some magic, as Nirvash was nearly destroyed before he got his hands on it. Magic sounds good enough. 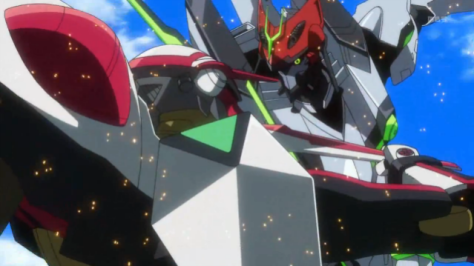 NO, THIS IS NOT HAPPENING! THERE IS NO REASON FOR THIS TO GO ON! WHAT ARE YOU FIGHTING FOR?!

Stop fighting, Ao and Naru. You used to be friends. Then Truth came and Naru got all messed up. How does Naru even control Nirvash? Oh, wait, Truth and magic.

Truth is back in his old form? Or is this the Secret that showed up in episode 14? Does this mean there are two Truth, one in humanoid and one in Secret form? Gosh. This is final boss material, I guess.

Before you scream “GEKKO-GO IN SPACE”, I have to debunk that theory. In the picture, all we can see is Team Pied Piper’s ship “Triton” together with Team Harlequin’s space station “Poseidon” and their spaceship, not the Gekko-Go. This could be seen in episode twelve, as shown above.

Homage to the Original Eureka Seven

Here we see our main characters lifting through the sky, one of the main signatures of Eureka Seven. This was strangely absent from the first opening of AO, but here we have it in its full, albeit static, glory.

Once again, AO mimics the original closely. We first see our main character, Renton or Ao, before our second main character, Eureka or Naru, shows up. One could argue that Naru is not equal to Eureka, but there is no other character that acts as a counterpart. This might suggest that Naru will be more prominent in future episodes. Well, she is piloting Nirvash now, so it is not too surprising. 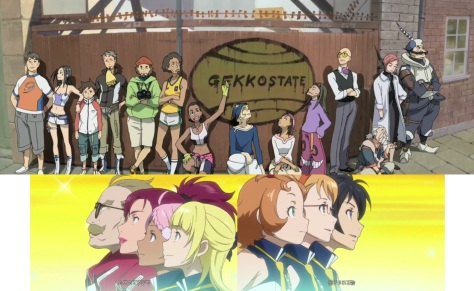 The main cast is introduced in the same time frame. After this, E7 zooms in on Renton, Holland and Tahlo, while AO switches scene to Truth.

This is from the second opening of Eureka Seven and, once again, shares nearly the same time frame in AO. Here we see Renton from the back and Eureka from the front, both drifting away slowly from each other. It’s the exact same thing. The only difference is that in AO, their son is there staring at them.

Back to the first opening and it is revealed that Dewey was actually a sloth all this time. Or the sloth is plotting something evil. They both appear and turn their head at the same time. Studio Bones is so silly. 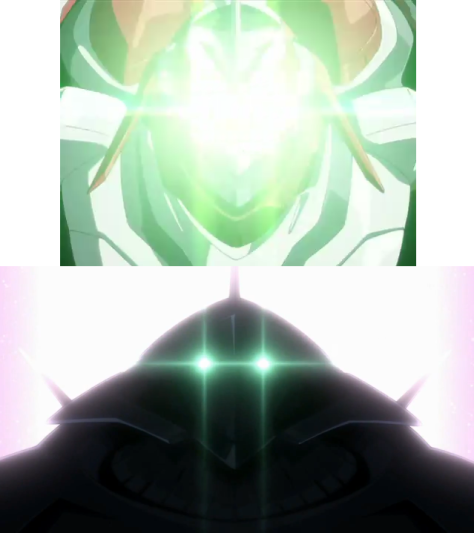 There is green light coming from the mechas’ eyes, both occurring at the same time. 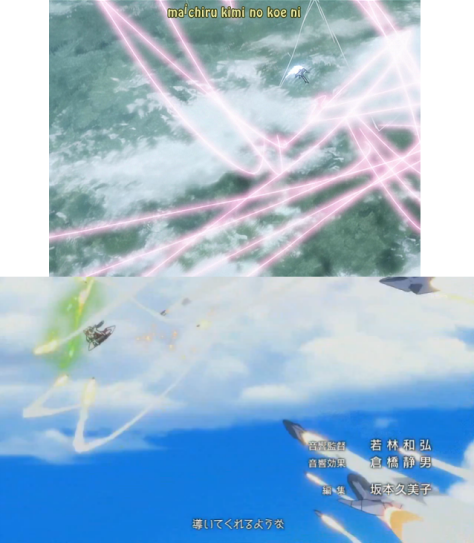 This is the typical cool battle scene in Eureka Seven: lots of lasers, missiles, crazy lifting and mecha action. We have not had any such battle scene in AO yet, but hopefully we will soon.

These two battles are very similar to each other. They both feature a close-up on a weapon firing and an enemy in a city that later explodes. 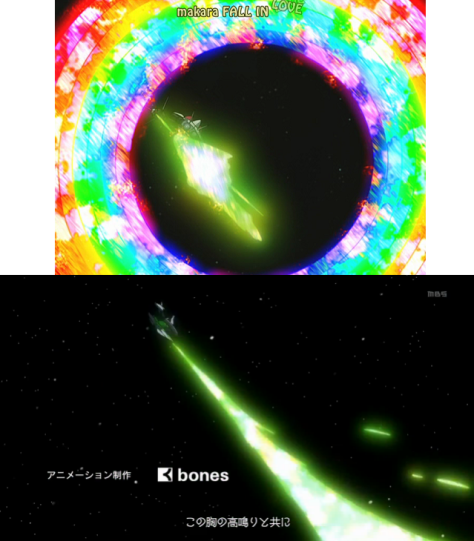 Mark 1 is lifting in space before later transforming into the “aircraft”-form and blazing through the vast darkness. Nirvash does the same thing, only accompanied by lots of colors.