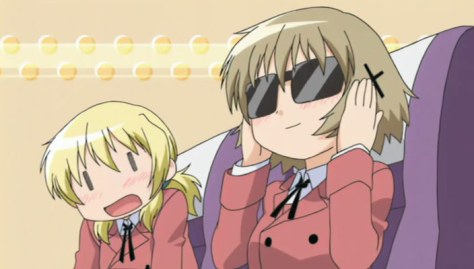 There has been a severe lack of actual anime blog posts lately here on Anime Viking. That cannot be good. There are so many things happening at once in the anime blogosphere and the currently airing anime season that you have no idea what to do first. And if you are a weekly blogger, the charm of novelty will be gone if you delay certain posts too long. My post schedule will probably be irregular in the coming weeks, just so you know!

A lot of people have been all cute and cuddly to me lately, mentioning me in their posts. At first it seemed like my fabulousness finally had reached out to other bloggers! But no, of course that was not the truth. I have too much personality to have my own personal harem. Instead it was an “Interrogation Game” in which bloggers asks each other questions. Madness I say.

Contents
1. So What Is “The Anime Blogger Interrogation Game”?
2. Rules
3. The Interrogation
3.1 Trollkastel from Going Commando on Anime
3.2 Orange from Daifuuku!
3.3 Yerocha from Shades of Grey
3.4 ZakuAbumi from ZakuAbumi’s Anime-Blog
4. My Own Questions
5. The Tagged Victims 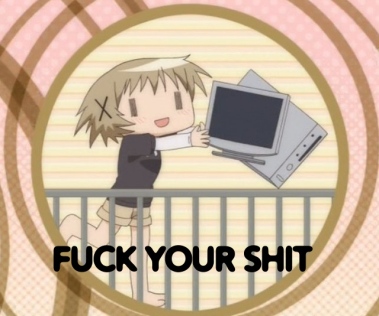 It is an idea created by Iso from Nabe!! and the reason behind it is that we bloggers should know each other better. As a result, we tag and interrogate ask each other up to five questions. If you cannot answer, you have to post a nice picture. There are some rules, however, which can either be found in the original post over at Nabe!! or below. I have been tagged four times, which is a lot. As a result, I will keep this fairly short. Hope you enjoy reading it!

UPDATE! Sistergirl from Secret Anime Lovers also tagged me. Read the post and my answers HERE!

1. Sawa’s too fat for her horse. And she needs like OMG TOTALLY diet~~~ How is Tari Tari better than Hanasaku Iroha?

Tari Tari has enjoyable characters, no dumb bondage, no wasted time, no drama that does not make any sense and more. Tari Tari feels a bit artificial, however, but it is still a ton better than Hanasaku Iroha that completely wasted its potential. Also, Tari Tari got Sawa and Wakana. Loveable characters indeed.

2. If we pray hard enough, will Muv-Luv Alternative: Total Eclipse not be considered part of the Muv-Luv canon?

Have a nice picture. 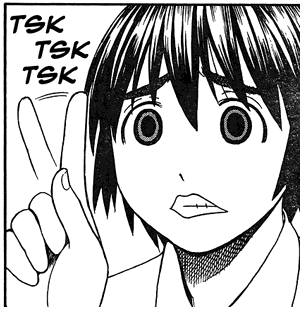 3. A young eight-year old girl, proclaiming to be a hardcore anime fan just like you, forced you to define ‘anime’ for her book report. She is a fan of Avatar: The Last Airbender. How do you explain how Avatar is not an anime to her without making her cry and call the police for sexual harassment?

This whole scenario is so silly. And why does she need to know what “anime” is for a book report? In any case, if we go by a Western view “anime” means cartoons from Japan. In Japan, however, “anime” is simply any kind of animation. There is no obvious definition. Let us just say it is a particular style of animation. Although, if that makes Avatar anime or not beats me. Stop caring about those details.

4. People have called Serial Experiments Lain, Mawaru-Penguindrum, and other similar shows “not anime”. Does this statement make any sense?

Seems like any statement by Trollkastel. In other words: no, it does not make any sense.

5. Is anyone ready for school?

Starting university will be scary, but it will be fun to learn Japanese. I am ready.

1. Which food has the most pleasant smell? (Can be imaginary)

The only time I really am aware of the smell of food is when it is in a special place. This means places such as bakeries, pizzerias or fish shops. When I enter any of those, the smell truly reaches me. While fish shops do not smell pleasant, bakeries and pizzerias do. It may be the smell of freshly baked bread. It is a wonderful smell, at least.

I actually answered this very question on another blog not too long ago, so I am copying my answer:

Even the “shell girl”, like Inori from Guilty Crown, is okay if there is a good reason for it. Although, I would probably still dislike the character, since it lacks personality.”

3. What kind of background music would you like to go with your ideal anime?

That depends entirely on what type of anime it is, does it not? And since I do not know what my ideal anime would be, let us stick with the fact that the music needs a soul. Listen to Aria the Animation’s soundtrack as an example.

4. How can you save the world from alien invasion with a roll of aluminum foil and an orange-shaped coffee mug?

I would make a tin foil hat to shield myself from the aliens’ electromagnetic waves and the coffee mug would be my trusted weapon. The world would be saved thanks to how dumb I looked.

5. What is the greatest invention in the history of mankind, according to your biased opinion?

There are simply too many great inventions out there that it is impossible to choose one. Instead, let me say that Tesla is the coolest guy.

1. What is your biggest anime/manga guilty pleasure?

The currently airing series Kono Naka ni Hitori, Imouto ga Iru!, also known as “NakaImo” or “Who is Imouto?”. It is a bad harem series, but it is so much fun. I smile every time I watch it and I giggle to myself. It is definitely my guilty pleasure.

2. How do you usually acquire anime or manga legally?

Internet shops. There is a normal bookstore here that has the One Piece manga, so I might buy that one there, but otherwise it is the Internet. The same goes with anime, but I rarely buy anime since the series I am interested (e.g. Toradora and Natsume Yuujinchou) are not available in Europe.

The only series I actually own is Samurai Champloo, but it was not a very good release. The subtitles were poor and the timing was off at times. Worst of all, the subtitles were white, so sometimes you could barely see it. Other than that, I do have Akira and a few movies by Studio Ghibli.

3. What’s the weirdest reason you’ve had to start a series?

During every new anime season, I start watching series solely by judging a little synopsis and a picture. Is that not a weird reason in itself?

4. What series from the new anime season are you most looking forward to?

I do not. I wish I could, however. Seeing the world in the same way as Akari from Aria the Animation would be wonderful. I would see the positive side of it and be gentle to everyone I meet. Sadly, there is no way I would be able to live up to that.

1.) If you were given the chance to write the name of one blogger in your Death Note, which one would you choose?

I do not know any bloggers name, I am afraid. And even if I did, I cannot say I despise anyone so much I would want to do that.

2.) What’s your stance regarding monster girls?

It is not my thing, so I am neutral. To be more fun, let me give you a nice picture. 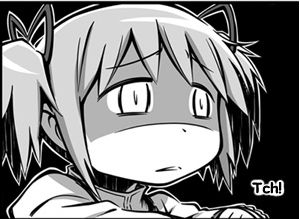 3.) What’s the most ridiculous screenshot you ever uploaded to you blog?

I do not think I have any… this is my best: 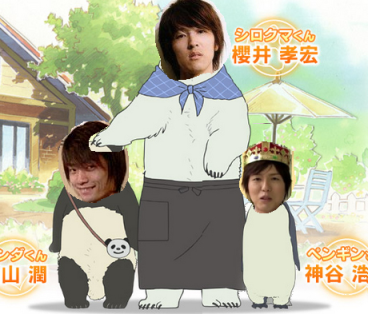 4.) You are given the chance to get to read the doujin of your dreams. What would it be like?

A doujin does not have to be perverted, right? Perfect. Then my only request would be to make a proper continuation of the manga “Beet the Vandel Buster”. Do it.

5.) Communication among bloggers is important! Statistics prove that English anime bloggers have problems when it comes to interacting with other anime bloggers! What kind of measures would you take if you were in charge of bringing all anime bloggers across the world together?

Blog in English. Success.
Do Blog Carnivals and stuff like this post. Success.
Make a dramatic tourney of some kind. Success.

I am going with three questions, as I cannot come up with five and want to keep it somewhat relevant to blogging. There are also only three bloggers tagged, since I do not want to tag people already tagged. Others should not have to suffer as much as I have. The pain! Here are my questions, and my own answers to them.

1) Besides the name you are using at the moment, was there ever any other name you had in mind for your blog?

Before I started blogging, I knew that I had to come up with a good name that stood out, but more importantly, was easy to remember. As a result of hours of thinking, Anime Viking was born. It may not stand out that much, but it is easy to remember.

One name I had in mind, but never was serious about, was “Loligagging”. It was a play on the word “lollygag” which, to quote Wiktionary, means:

“To dawdle; to be lazy or idle; to avoid necessary work or effort” or “Silliness, nonsense”.

Rather fitting, is it not? To “anime-fy” the word, I changed “lolly” to “loli”, since it is a typical word used when you talk about anime.

But after some thinking, it did not feel that good. It did not fit me. I am not into lolis and therefore it simply felt dumb to have that name. I am still secretly fond of the name, however.

2) If you were to start blogging with, or for, someone else, who would it be?

This is a tough “confession question”! It would have to be a blog I could fit on, otherwise it would be meaningless. If I were to join a team blog (there are not too many of those, now that I think of it), I would probably join Organization Anti-Social Geniuses or, perhaps a bit shocking, Ambivalence, or is it ambiguity?. OASG because it has a bunch of great guys I really enjoy and they have a variety of posts. AOIA would be since it has a focus on editorial posts while still being a team blog.

If I instead were to team up with another blogger, it would be a tough nut to crack. It would simply have to be a blog I enjoy, and someone who enjoys mine. Being someone I often talk with would be good too. I have no idea of what the people I tagged have to say about me, but I would probably not mind teaming up with them at all if that were to happen without any notice. In fact, there are some other people I have not mentioned (maybe you know who you are?) I would not mind teaming up with. But it all comes down to: do I fit in?

3) Why do you blog in your particular style (episodic/editorial/both/other/)?

I have chosen to focus on editorial blogging since it, simply put, fits me the best. Doing episodic blogging would be too time-consuming, as it would force me to write a about particular episode every week. Sometimes I might not even have anything to say about the episode in question! It would result in shallow commentary and only blogging one series would be rather boring for both me and the reader, would it not?

Editorial posts can be about whatever you want and there is no “time limit” when doing them. It can be a pain to come up with topics at times, or even start writing, but it is worth it in the end. I can use my imagination when doing them. That is what I love.