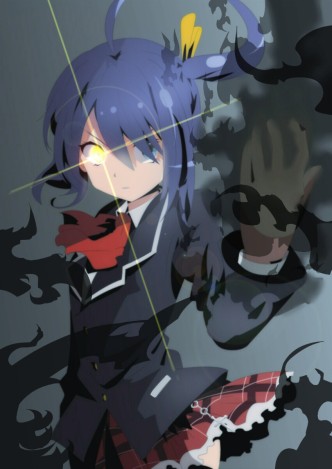 In the last post I told you about my favorite anime openings of 2012. Now, it is time for my favorite endings!

Anime endings are usually never given much attention by viewers since they play at the end of an episode, but personally I find them just as important as openings. If something bad happens in the series it would not be good if a cheery song would start playing, right? It would ruin the mood. Naturally this did not play a part of my judgment when creating my list. Instead I just chose what I liked.

Hope you like them as much as I do!

I am a sucker for the singer marble, okay? Her voice is lovely. A shame I could not find the updated version of the ending, which is much prettier than this one.

Kyoto Animation probably had an unused K-ON! ending lying around, but it completely misses what made those work: the harmony between the music and the animation. Here it is… random stuff that tries to look cool while failing.

As a side-note, this ending (as with the opening) became horribly unfitting as the series went on.

Sakurasou is odd in how I really like both its opening and ending songs, but they both fail at the visual part. This ending gives me energy and makes me happy, however silly that may sound.

A feel-good song with still pictures showcasing the cast making fun of each other. The latter part makes me smile.

I do not get this ending. It got a really strong song, but one second I may like it but another one I may not. This is why I cannot put this in the top list. If I always liked it, it would with no doubt place high in my rankings.

The first part of the song is actually from an old Japanese folktale about a couple that could not come up with a name for their child. Despite the priest suggesting many names, they could not decide, so they ended up giving the child all the suggested names.

Never would I have thought such a name would end up in a catchy song as this.

Man, I really love the visual approach of the openings and endings of Rinne no Lagrange. Too bad this particular song is not too catchy.

The song is awesome. I actually added it to my Spotify playlist about a month before JoJo aired and liked it. Too bad I almost fall asleep when watching the actual ending, though.

The typically sweet ending by HanaKana. No way you can dislike it.

I have a thing for calm and stylistic endings like this. It helps that the song is nice too. Besides, it got black borders. Not sure why, but I like that touch.

This ending continues to grow on me, especially the strong start to make you hyped for the song. It is like a wave. Starts strong, drops in intensity, gradually builds up and then, wham, chorus! And visually it fits.

Punch me or something, because I have no idea why the heck I love this fanservice ending as much as I do. Sure, it is catchy and nicely done, but still. Maybe it is because I love Ichiko and Momiji so much. Help me.

7. Papa no Iukoto wo Kikinasai! ED
“Coloring” by
Yui Horie

This series got way too good opening and endings. It has convinced me to give it a try.

As you probably can see, this video has been altered to avoid copyright issues. If you want to view it in its original form, you can do so HERE.

The endings of Natsume Yuujinchou have always been warming and this one is no exception. A strong ballad and warm animation, more or less.

Shaft are doing their usual thing with a unique sense of animation and great songs. Much to my surprise they will have to take off their crown this year and give it to some other endings that managed to be even better.

Warning ED1: Only watch from where the video is set to start and stop when the ending is finished (04:50 mark). Otherwise you will be spoiled.

For a series that went overboard with the drama and underutilized its wonderful concepts, it sure had great endings. I cannot really put one over the other, so here they all are in place number three.

It is Masumi Itou.

Plus some dreamy sequences of the rise and fall of our civilization.

If you do not like it, you may now leave.

I could watch/listen to this for a whole day and I would not get bored. In fact, I actually did listen to it for almost a day once.

Wareta Ringo is my own perfect anime ending.

At least from this year.