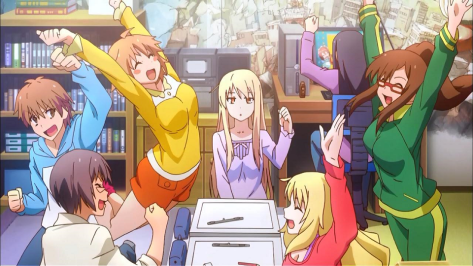 Something has been wrong with me lately. There is this little anime I cannot get out of my head. With each new day I think of it more and more. I become all excited and happy about it for no apparent reason.

I think I may have gone mad.

Have you heard of the anime called Sakurasou no Pet na Kanojo by J.C. Staff that aired fall 2012? It was a very frustrating anime, with many parts that adhered to typical clichés found in many romcom light novels, such as overblown drama, nonsense conflicts and mostly unoriginal character personalities. Many of the situations and trials were also things that could be found in other anime.

Yet Sakurasou had its fantastic moments. After lots of angst there was usually a resolution stuffed with positive energy that really inspired me to be a more creative person. It also had a story about finding out what to do with your life and how difficult it can be, which really resonated with me at the time. Plus it was just so full of life unlike many other anime titles that I could not help but adore it.

Watching Sakurasou was like a roller coaster in terms of enjoyment. While I always looked forward to it each week, it almost always ended up with me feeling either disappointed by how it took a safe route or satisfied by how fun it could be when it wanted to. In the end, after a great finale, I still had feelings for Sakurasou, but they were also mixed with annoyance by how much better it could have been.

Sakurasou was an anime with great potential, but partly ruined itself by falling into predictable situations. It very much reminded me of a Toradora that failed to be itself rather than a guidebook to unwritten light novel rules.

But here I am today, a few months after it finished airing, completely fawning over the series like a fool. I listen to its openings, endings and even soundtrack. I beg for a second season like nothing else mattered. I search after pictures at any given instance. I start playing episodes only to quit a minute later. I forget everything frustrating about it.

I even start questioning myself. Things like “Perhaps the reason I disliked Mashiro was because that I did not understand her?”, “Maybe I has too hard on the heavy drama after all”, “Maybe the reason it was frustrating was due to watching it weekly” and “Maybe Sakurasou was pretty awesome after all?” enters my mind when I least suspect it.

It is a bizarre feeling I currently harbor for Sakurasou. I think I may have a thing for it. Or perhaps I always had, but it is not until now I fully realized it.

A series packed with obvious flaws and dumb mistakes, but also a heart and soul. That is Sakurasou.

I will let my feelings continue to be out of control until around Christmas when I finally re-watch the series. Maybe it will turn out that I had only hit my head. Or perhaps I will embrace Sakurasou and say:

“You are, without any doubt, one of my favorite anime series.”