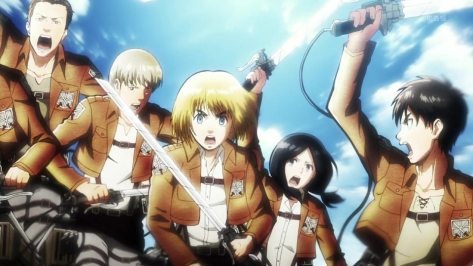 Expectations are dangerous. If they become too high there is a large risk of ending up disappointed with whatever you had expectations of. As a way to counter this I tend to generally have low expectations and not hype too much, which generally means there are positive surprises to be had.

Yet there will still always be cases where you simply cannot avoid setting expectations, only to later on see them be shred to pieces.

Lately there have been cases where I have ended up disappointed in certain anime titles, many whom outright fooled me with their very first episodes. Attack on Titan, which is currently airing, is one of those titles. To get straight to be point: I am not a big fan of Attack on Titan.  There are too many problems in terms of the production, such as numerous lazily made scenes to avoid actually animating the series and a glacial pacing, and the story itself that I cannot help but feel disappointed.

The largest issue with Attack on Titan is that there are glimpses of how spectacular it could have been from time to time. The first episode in particular, and the few after, is a real tease since it is so well-made. It had atmosphere, gorgeous animation and a feeling of hopelessness. As a result I had expectations. This was, after all, an anime that was hugely hyped before it had aired due to the manga’s popularity.

Then one disappointment after another appeared. Less animation, less focus on the hopelessness and overall a feeling that Attack on Titan could not recover. But when it was at its worst the second arc started and once again the series impressed me as much as the first few episodes had done. My expectations had been restored… 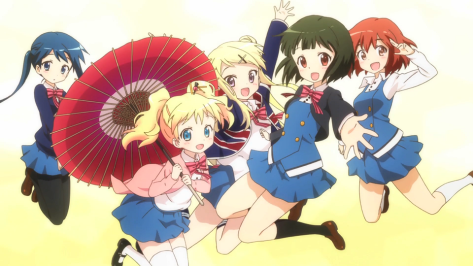 … Only to be crushed a few episodes later when it yet again degraded into a bit of a mess with sometimes amazing moments. My expectations were once again gone.

And this makes me wonder.

What if Attack on Titan had not started out as great as it did? Would I have enjoyed, and accepted it, more than I do in its current state? This also applies to Sword Art Online, another popular anime, which had a great starting episode which promised a lot but later failed to deliver.

The anime titles themselves had put on a façade which led to false expectations.

My latest offender is Kiniro Mosaic, which started as the cutest little anime I had ever seen. I smiled throughout the whole episode like I had never done before. It was just so cute! So I expected cuteness overload each week.

But, of course, this also turned out to be false expectations.

It was revealed that the whole first episode of Kiniro Mosaic was based on a single 4-koma strip from the original manga. Basically it was completely anime original. So when the series actually started adapting the manga it became worse every week due to lame character chemistry and a poor transition between each joke. It was the polar opposite of the picture the first episode had painted.

The list could go on with anime that has made me disappointed due to my high expectations. Is it possible that I would have liked them a lot more if it was not for how they pretended to be something they clearly were not?

It certainly is possible, but one will never know.

Because in the end, all we know is that expectations are dangerous.

35 thoughts on “How Expectations Can Make or Break Anime”