In 2013, a flower of evil bloomed. This flower, because of its existence, created a gigantic shitstorm that is hard to describe with words. Never before had I witnessed such a massive backlash when it comes to anime.

The anime in question was an adaptation of the manga Aku no Hana. So what did the anime “do wrong”?

Watching a rotoscoped anime was, to say the very least, a fascinating experience. I am not exactly sure why the team behind Aku no Hana thought rotoscoping was the way to go, but it certainly gave the anime a unique feel to it. The characters both looked and moved realistically while the colors were bleak and depressing.

It was definitely a bold move to use rotoscoping, but I am not sure if that was the best way to adapt Aku no Hana. Even if we ignore the poor quality of the rotoscoping – faces fading in and out, jerky animation, expressionless faces, a severe lack of shadows and more – it is hard to say if striving after such a gritty realistic look was a good idea. 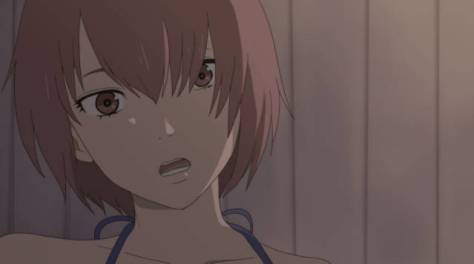 See, the idea in the manga is that three normally-looking young kids have messed up insides. These two sides clashes with each other and is what makes the Aku no Hana manga so shocking at times. The manga never necessarily tries to be grounded in what it is doing, no, it only wants to take these kids and mess them up as much as possible.

The anime, however, takes a different approach. With rotoscoping, the two clashing sides are lost. There is no contrast anymore. The kids themselves do not even look young in the anime, which becomes awkward when they behave as if they were many years younger. And the overall sense of madness is lost due to lack of intensity in many scenes, which is never achievable because of the rotoscoping (at least, not in the way Aku no Hana uses it).

It is such a shame that Aku no Hana never did its source material justice. A “normal” anime adaptation would work perfectly well for Aku no Hana and I hope that we one day will see just that.

But despite all this Aku no Hana managed to give us some fantastic scenes. These were also the moments when the rotoscoping and directing clearly had been given high priority. They looked great and there was a sense of madness, even if not the same kind as in the manga. Here, the rotoscoping worked wonders. This was how the entire series should have looked like if it were going to use rotoscoping.

Here is one such scene from episode 7. Watch at your own risk: