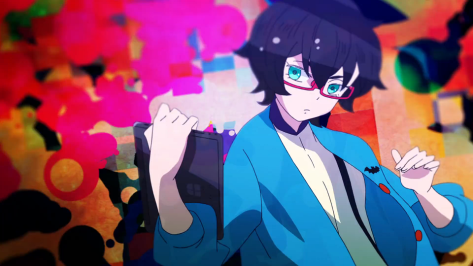 It is that time of the year again. The time when we look back on the anime that has aired and think about what we have, or have not, watched. As usual, I will write a handful of posts listing anime of 2013.

First out, we have the best anime endings of 2013!

Remember that these are my opinions, and that I have not checked every little anime ending there is, so do not flip out if you do not agree with me. Share the ones you liked instead!

In comparison to last year, there has been a lack of stylish and catchy endings which I generally enjoy. In addition, if you have read last year’s post, my favorite ending of 2013 might give you a feeling of déjà vu.

This ending has a singing goat. Do I need to say more?

One ending that always managed to cheer me up was “Hello Especially”. It gave me energy when studying, but it also managed to make me feel relaxed at the same time. The song fits Silver Spoon perfectly, and I think of peaceful times in the countryside.

When I first saw this I could not really believe my eyes. It was hilarious in a good way. In fact, it still makes me giggle at 00:56 when Rin pours water over himself and enjoying it to the fullest.

Valvrave has some rather great songs, even if they visually are boring slideshows. The ending that stuck with me is “Boku ja nai” since it felt very “in your face!” after each episode in comparison to the others.

I think I realized something this year: idol anime can be pretty great if you give them an honest try. Furthermore, this is also the year when I came to take a liking to vocaloids.

So here comes Miss Monochrome and combines the both, making it hard for me to dislike this good-looking CGI ending. Monochrome herself looks a bit expressionless, but that does not stop me from going “Sooo prettyyy” while loving every second of it.

Yet another ending which I mainly enjoy for a very personal reason. Despite the characters merely tilting their heads along with the song, it cannot help but feel a strange charm. Said charm also ends up making me mimic the characters and sing along.

However odd this may sound, GJ-bu ended up as one of my favorite anime. Another thing it succeeded with was with its four different endings. The one I particularly enjoy is this one, featuring Shion from the series. I have a thing for visually stylish endings.

One of my favorite Japanese artists is Nagi Yanagi (whom you might know from the band Supercell), so I have a strong bias towards “Aqua Terrarium”. Nevertheless, this is a pretty ending with a pretty song.

The song. Oh my, the song. I have no clue what type of sound or instrument it is using, but I love whatever it is. It makes me think of water, strangely enough. Not to mention how hypnotizing it is.

This is not the first time I have heard this “sound”, but I have yet to figure out whatever it comes from. If anyone happens to know, please tell me.

Sometimes a lovely song and simple slides is all you need. It is also nice how it focuses on Benten, since I personally felt she lacked screen time.

I cannot come up with anything else to say than “beautiful”.

A new voice actor I have been keeping my eyes on is Maaya Uchida. You may know her from playing Hajime in Gatchaman Crowds or Rikka in Chuunibyou Demo Koi ga Shitai!. So color me happy when I heard she was singing “INNOCENT NOTE”.

Although the CGI characters look a tad bit weird, I would not call them ugly. It is a different style that works well with this cool and colorful ending. The song itself also feels very “empty” and lets the instruments take a back seat. This gives it a very melancholic vibe, which I dig.

You know of those annoyingly catchy songs you cannot get out of your head? This is one of them. It also happens to be awfully stylish, even featuring typography with the Japanese lyrics!

What better way to end an episode of Attack on Titan than with this awesome ending? There is none.

In 2012, I declared Shin Sekai Yori’s first ending, “Wareta Ringo”, to be the best. This year, that award goes to its second. Listening, or watching, “Yuki ni Saku Hana” never gets boring. This is a beautiful ending I have spent countless hours with.

It makes me think that something very sad, and of large scale, is about to happen. This is especially true when it at the end zooms out and shows the landscape with a strong blue light illuminating the dark sky.

It is as if the world is ending.