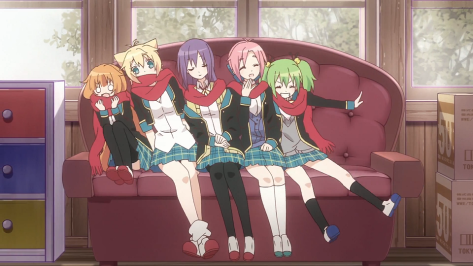 2013 has been a strange year of anime for me. For starters, there are only ten anime series that I feel genuinely soft for and out of those four happen to be leftovers from the previous year.

In addition, almost all of the anime on this list has one thing in common: they are “light and fluffy”. They could be labelled as “slice of life” and are generally heartwarming. Relaxing, happy and fun.

Exactly why this has been the case is a mystery to me. While slower anime about nothing in particular has always appealed to me a lot, I cannot help but feel that maybe my viewing habits have changed. Is it perhaps a way to break away from the real life and stress? Possibly.

On another hand, I do feel disappointed over how I did not enjoy series such as Kyousougiga, Eccentric Family and Gatchaman Crowds as much as I initially did. They are exciting anime for many reasons, yet they did not remain as my loved ones as the episode count progressed. 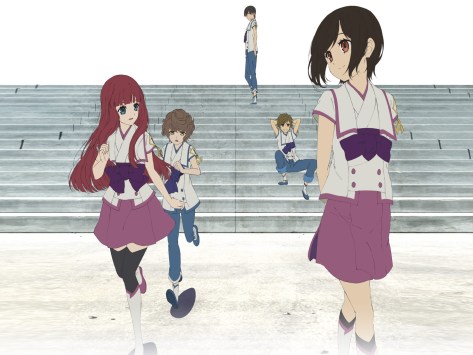 In many ways, Shin Sekai Yori is a unique anime. It stands out with its distinct story, covering three different points in our main characters’ lives, and overall bleak tone. This takes place in the future, in which humanity despite its godly “psychic powers” happens to be on the verge of collapse. Being based on a novel, not a light novel, this is not something you usually see in anime.

Not to mention the actual anime itself, that has a fantastic soundtrack and a lovely visual style to boot. The atmosphere is tense and it is hard not to be at the edge of you seat, especially during the final episodes.

What holds Shin Sekai Yori back is ironically the fact that it is not the novel itself. There are multiple times when it feels as if the story presented in the anime is fragmented, seeing how it continuously uses fade-outs to jump between different scenes. Very much like a Harry Potter movie, while great, it basically screams that you are not getting the full story.

However, at the same time this says a lot about how thrilling the story in Shin Sekai Yori actually is. It is so good I want more. Honestly, if you have not seen this yet then you better do so. Now! 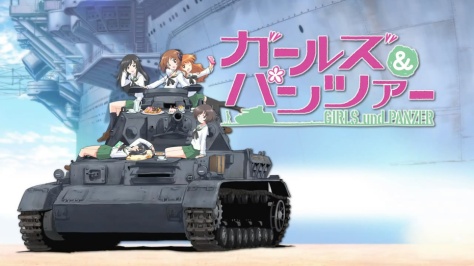 Take a moment to imagine the whole premise. We have school girls riding tanks, competing with other rivalling schools. Oh, and the schools are located on aircraft carriers.

Sounds insane? Well, it is.

Yet Girls und Panzer takes itself seriously, providing some of the most intense action sequences I have seen. Even so, it never forgets to balance it out with comedic moments to create a great whole.

Tanks have never appealed much to me, but Girls und Panzer managed to make hooked. It is pure fun. Fun, fun, fun. Fun things are fun. 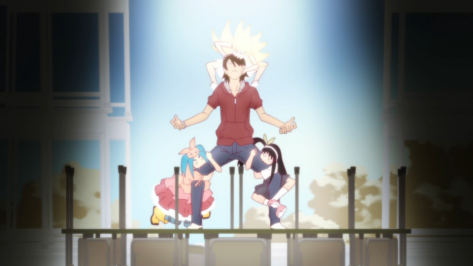 After the miss that was Nisemonogatari, it is good to have the franchise back in action. Monogatari 2nd Season might lack the cool animation Nisemonogatari had, much likely due to being double the length, but in return it has some great stories to share. Plus, as always studio Shaft manages to create a stylish appearance with ease.

What makes Monogatari 2nd Season different than its predecessor is how it completely ditches our previous protagonist Araragi. Instead, the focus lies on the girls he saved back in Bakemonogatari. Not only is this a fresh change of pace as Araragi’s shtick had long grown boring, but it also helps breathe life into some previously one-dimensional characters.

It is a shame then that one of the arcs, the fourth to be precise, is utterly terrible in every way. What is supposed to be an intense story fails to be so because of all the nonsense talk the Monogatari franchise is known for. Another great sin is how Araragi is heavily prominent again, spreading his creepiness all over the place just to ruin the supposed tense moments.

Other than this little mishap? Monogatari is finally back in style. 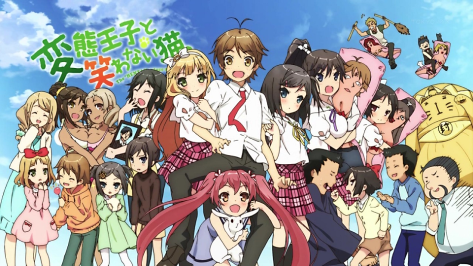 J.C. Staff has done a splendid job with Henneko and managed to bring out its silly and slightly perverted energy perfectly. What surprised me the most is to find an actual story and not only random hijinks with slightly eccentric characters. No, instead the episodes all built up to a great conclusion.

I did not expect to have as much dumb fun with Henneko as I had. Oh, and do I need to mention how addictive the opening song is? 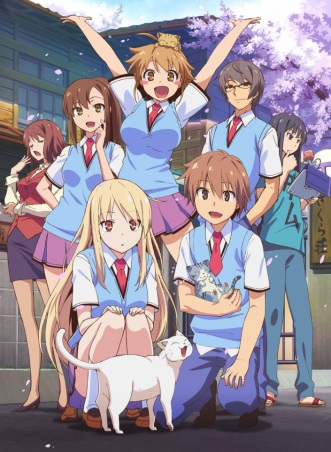 I can relate to the struggles found in Sakurasou no Pet na Kanojo.

Sakurasou no Pet na Kanojo is too safe at times.

To be perfectly honest, I have a hard time talking about this anime. Back when it aired in Japan, I followed it weekly and felt exactly as I described above: love and frustration.

The characters, especially Sorata Kanda whom we follow, are all relatable if you have found yourself in a similar situation. To be more precise: trying to discover yourself and what you want to become in your life. Not to mention the hardships it comes with. I laughed and cried with these guys.

If you, however, have not experienced this there is a risk of the often overblown drama going straight over your head. What Sakurasou no Pet na Kanojo lacks is a natural build-up to its conflicts, often due to the characters’ issues not showing until it is time to burst. This leads to rough storytelling, especially during the first half which has very obvious mood swings.

Despite these problems, it is hard not to fall for Sakurasou no Pet na Kanojo. It lovingly invites you to stay at “Sakura-sou” with its quirky inhabitants. Furthermore, after every drama segment there are lots of funny and easy-going moments to balance it out a little. When watching Sakurasou no Pet na Kanojo, I felt motivated to do better myself.

That, in itself, is enough reason to watch Sakurasou no Pet na Kanojo. 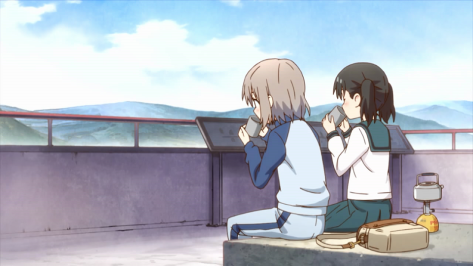 Do you like anime shorts? Do you like mountain climbing? Do you like cute things? Then Yama no Susume is a perfect fit for you. Besides, you can finish the whole series in half an hour if you still are not convinced.

If there is anything I have wanted to do more of, it is finding trails or climbing mountains. Not extremely difficult ones, mind you, but those you can do without too much of a hassle. When I visit Japan, I know for sure I want to climb up some mountains (even if we are only talking about “walking” up to the top).

As such, Yama no Susume appeals to me a lot. It provides a well-made, sweet and exotic tour of places I have yet been to. If only the episodes had been longer than a couple of minutes… 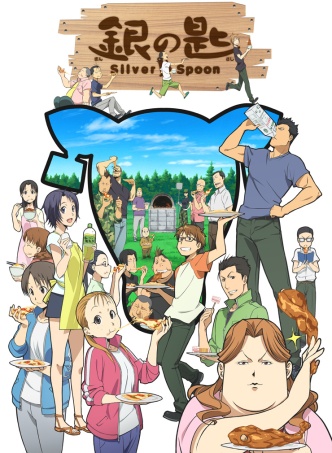 Silver Spoon tells an engrossing tale of the city kid Hachiken who does the unexpected and enrolls in an agriculture school. Throughout the series we see a once immature and whiny boy slowly mature into someone who understands how tough the farm life can be.

While the second half of Silver Spoon is currently airing, this “first season” managed to tell its own narrative arc in Hachiken’s life. It is fascinating to see him grow and I cannot wait to see what the “second season” has in store for us. 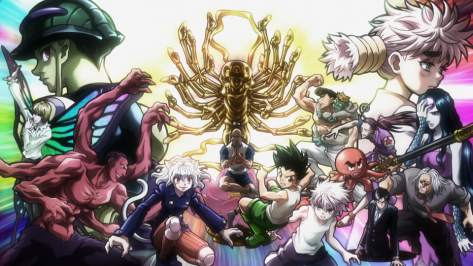 Calling Hunter x Hunter one of my favorite anime for the third year in a row feels like taking an easy way out. There is not much to say other than “Go watch it!“, because this is a marvelous adaptation handled with great care by Madhouse. This, coupled with Yoshihiro Togashi once again having written a fantastic manga, is nothing short of a dream come true.

At the moment we are deep into the “Chimera Ant” arc, the largest and most mature part in Hunter x Hunter. It is so tightly written and has such gruesome scenes it is at times hard to understand this was actually originally published in Weekly Shounen Jump.

Seriously, there is no good reason for you to not watch Hunter x Hunter if you enjoy great action series. Off you go! 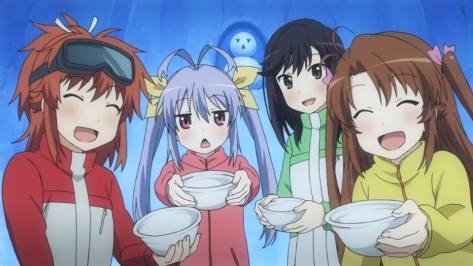 How do you write an anime that is about nothing in particular? Non Non Biyori takes places in the countryside of Japan and we follow four young girls doing whatever they want to. It is all about the atmosphere, which Non Non Biyori pulls off with ease.

It has gorgeous landscapes, soothing soundtrack and charming characters. You know if you are part of the intended audience. I knew I was, washing away all that was bad and replacing it with happiness. 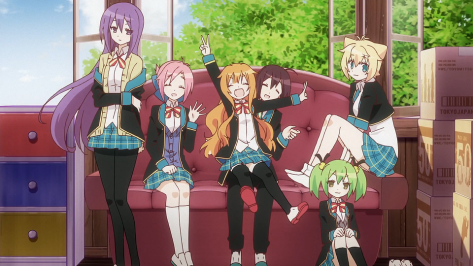 Somehow, GJ-bu ended up as one of my favorite anime of all time. How it managed to do so is unbeknownst me. I have tried to explain why, but much like every other relaxing slice of life anime it is nigh impossible since it all bottles down to “feelings”.

What I can say, however, is the following: