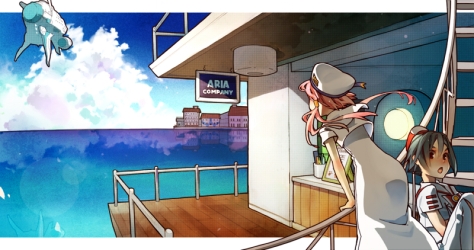 It has been a little over a year since I was first featured on Crunchyroll News, gushing over how GJ-bu charmed me to no ends. Being able to have my texts published on the largest English legal streaming website for anime made me incredibly happy.

Having the opportunity to reach out to others and see my writing yield results was something I never could have been able to imagine before; not on such a large scale. It was, in a sense, a dream come true. For the first time in my life, something I truly wished to do was an actual possibility.

As time passed more texts were accepted. I did not send in many – after all, I wanted them to fit (i.e. many older ones on time-specific topics were not sent in) – but essentially all of of the ones I did were accepted.

Nothing in my writing was ever affected by this relationship, as I first and foremost wished to represent my actual opinions. I would never write if I could not be honest and open about it. You could call this my writer’s integrity.

Here is a full list of all my texts featured on Crunchyroll next to the original texts on Anime Viking:

A total of ten texts spread over ten months, with the start in March 2013 and the end in December 2013.

Unfortunately, I have as of April 2014 decided that I no longer wish to write for Crunchyroll. This is a conclusion I completely reached on my own based on my beliefs.

Considering the lack of consent from the person(s) involved, I cannot shed any light on the details surrounding the situation. What I can say, however, is that I would not be able to stay the same person as I am today if I were to continue writing for Crunchyroll.

This last year has been a lot of fun. To have had the chance to be published on Crunchyroll makes me nothing but thankful. I may have only been a “Guest Author” instead of a full-fledged contributor, but it still makes for a unique period of my life to be treasured. It is a period I will fondly remember. To me, it means a lot.

Anime Viking will no longer be featured on Crunchyroll.

Some things are just not meant to be.

18 thoughts on “Anime Viking is No Longer on Crunchyroll”