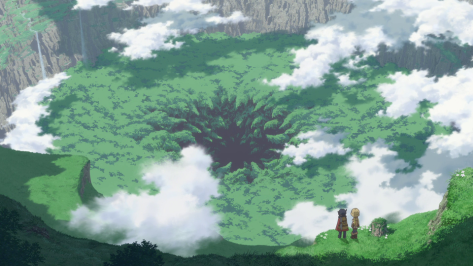 Made in Abyss. What a beautiful series unlike any other in recent memory and one of a kind I doubt we’ll see again in a very long time. For my lack of ability to convey how absolutely special it is, I’ll leave you with this simple description: it is one of those series where everyone involved in its creation – whether the original manga creator or the anime adaptation staff should be valued the most I don’t know, nor does it matter – just get “it”. This intangible “it” here represents what one could call a wondrous sense of adventure and discovery, loneliness and friendship, beauty and horror of the world. Together with its sublime soundtrack, one that might be one of my favorite in all of anime only rivaling my eternal favorite ARIA the Animation, it on a whole to me felt something much more than a short series. One month after having finished it, it still lingers fresh in my memories as if it has never left me. Truly, if time is scarce and you only have enough to watch one series in 2017, this would be my recommendation.

Yet, for all the praises I sing there was a time when I almost turned it off to never once more continue. At first this can seem like a strange occurrence, as after all I do love it with all my heart today. The particular moment when I almost left it be was also at the very end of the first episode, despite having fawned over the entirety before it. For an introductory episode that put me on an emotional roller coaster, trying to grasp the “it” I was actually experiencing wholly unprepared, to cause such a reaction it surely must’ve been despicable, no? With the risk of sounding foolish, it was a mere sentence that caused this and coupled with the few following ones it was like the nastiest, most unexpected one-two punch of storytelling. So what did they entail? Well… it was acknowledged a world existed outside of the Abyss. That was it. That was all it required for me to raise my hands up in the air, sigh and feel disappointed with everything the episode had carefully spent time building up being reduced to dust.

Allow me to explain. Throughout the episode we are shown how there is a human society surrounding a giant, seemingly endless, chasm aptly named the Abyss. This Abyss is the very center both figuratively and literally, as the entirety of the story takes places within this chasm – it is as much of a main character as the actual humans. Filled with mysterious relics of a presumably ancient culture, dangerous outlandish beasts and a society filled with the desire to reach the bottom despite all of this to the point of even allowing children to explore, the Abyss is the center of the world. The society is presented as if the Abyss is all they know and all they have. Their technology is a strange mix of modern technology such as flashlights, electricity, elevators or small balloons, together with older houses, culture, mythical books and a lack of computers, land vehicles or aircrafts among other aspects. It is very much a fantasy setting, where the technology to alleviate the difficulty of exploring the chasm is missing while what does exist is entirely made for the purpose of enhancing the thrill of it. There are no long-range or strong weapons, communication is difficult and requires messages attached to balloons that have a risk of never reaching their destination and so forth. I can accept this setting; I find it believable to a degree. In time, all of those things could possibly be acquired, however at this point when the story unfolds they have yet to be discovered. For an isolated society who knows nothing but the Abyss, later shown to be on a tiny island surrounded by a vast ocean, it makes sense everything would go into exploring it. Despite its dangers, there is nothing else they know of.

This is why, when the following quoted brief narration occurs at the end of the first episode, it is impossible for me not to be disappointed:

“About 1,900 years ago, a huge pit was discovered on a remote island in the southern sea of Beoluska. With a diameter of around 1,000 meters and a depth that is still unknown to this day, the mysterious formation mesmerized people. Valuable and dangerous primeval creatures and mysterious relics that are beyond comprehension beckoned adventurers looking to strike it rich, which in time gave rise to a giant city. Over the span of many years, with a spirit of adventure for the unknown and countless legends luring them in, the world’s only remaining unexplored chasm has swallowed up a great many people. It is known as the Abyss.”

In less than one minute, the whole setting collapses on itself and I can no longer believe it. Humanity is implied to be a modern civilization having explored the whole world, including other chasms. The Abyss has been known for 1,900 years despite very little advancement made towards the bottom and mostly primitive technology is shown. It’s an acknowledged location for adventurers, as if a tourist spot, yet there is a society there which allows children to explore such a dangerous location with little caution. The mythical spirit Made in Abyss created up till this point vanishes entirely in one fell swoop. Following this reveal, my desire to continue on was lost. The world-building had been shattered to pieces.

As the existence of this text suggests, I did nevertheless eventually watch more. It took several weeks to do so, but when I did Made in Abyss took me by surprise by never fully acknowledging its narrative failure again. In its second episode, it in one sentence mentions the discovered relics can be sold for money in foreign countries and in a short – seemingly pointless – segment in a later episode there are revealed to be relatively advanced boats, but apart from these there is nothing. There are no foreign adventurers seeking thrills and no mention of the long human history or the potential ethical issues of sending children to their almost certain deaths. The Abyss again becomes the center of the world as our main characters descend further and further into the unknown. And just as the characters truly believe in the mysteries and dangers of the Abyss, so, too, could finally I once more.