Apparently no-one found this real preview post that was hidden in the other one, so I decided to just make it easily accessible instead.

So you actually found this “not-very-well-hidden-super-secret” post. Congratulations! You gain nothing but a poor list of the series I will watch this fall 2012 anime season. For far more detailed previews, head over to these sites:

Or, even better, you may want to take a look at this wonderful chart preview provided by ours truly Redball from O-New!!:

What to Watch
(besides Hidamari Sketch, obviously)

Okay, the premise sounds all good and the source material being a novel, instead of a light novel, is a huge plus. This could become a gem if it was not for one damn big thing: it is adapted by studio A-1 Pictures.

It is the studio responsible for the dreadful Sword Art Online that is currently airing and the poorly executed Ano Hana among others. Yes, there are a few good series they have created, the most recent one being Tsuritama, but I do not trust them in the slightest. Prove me wrong!

After a quick check there are apparently NSFW yuri-scenes in the manga. So much for this anime unless it is different.

Try reading the manga. I cannot really explain it. Have this synopsis if it somewhat helps:

“Litchi Hikari Club revolves around a group of schoolboys who plan to create the ultimate in Artificial Intelligence.
As the story progresses, we watch the group gradually fall apart due to internal conflict and as the boys, under corrupt leadership, involve increasingly more twisted and depraved methods to reach their goal.”

It is rumored to only be a series of “comedic shorts”, whatever that may mean. 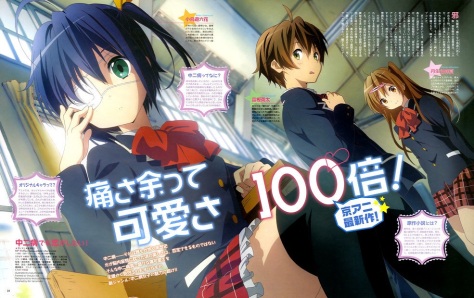 Kyoto Animation being the creators is basically enough of a reason for me to watch this. Along with Shaft and P.A. Works, they are a studio I always follow as long as their product does not make me cringe. Luckily, Chu 2 Koi (as it is called for short) does not seem to be that.

I doubt it will ever tackle the issue in its very own title seriously, but I am really curious about the “chuunibyou”-part of the series. 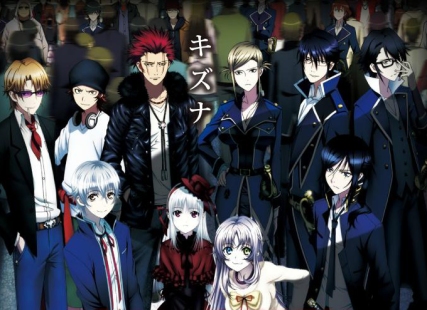 Sexism the Anime – The Third Season. If possible, this anime would only allow male viewers I assure you.

The first season covered four volumes of the manga, while the second one covered about six and a half. That means they have covered 11.5 out of 20. Unless they slow down the pacing, this will be the final season. Hopefully it is.

This is the drama of the season, both when it comes to in-anime and reality. Key is a fancy developer of Visual Novels with a sense of how to manipulate feelings, something that has given them a high status, especially thanks to the anime adaptation of their game Clannad which is considered a masterpiece by many.

So now they, together with Jun Maeda of course, are back with the animation of  their game Little Busters!. But not everything is as usual this time around. Kyoto Animation, the studio responsible for every other adaptation, has abandoned them. So what happened? Instead of seeking help from P.A. Works, the creators of Jun Maeda’s original story Angel Beats!, they went to… J.C. Staff, the studio famous for massacring any kind of source material. Good job!

Now, J.C. Staff may have quite a lot of great titles on their track record, but the ones in recent years are far from leaving anyone in awe. Naturally, this is worrying. But hey, I do not really care. I cannot say Kyoto Animation themselves were as flawless as some people claim. In fact, their adaptations often felt stiff since they almost always adapted the side characters’ arcs.

It is said that Little Busters! is vastly different from the traditional Visual Novels by Key. I have no clue what it means, but perhaps thanks to that J.C. Staff will make a proper job after all? If this turns out to be bad, I will laugh. If it turns out to be good, I will also laugh. It is a win-win situation for me.

But wait! The main character is called “Riki” and seems like a generic male lead. DOES THIS MEAN THERE WILL NOT BE A SARCASTIC PROTAGONIST?! 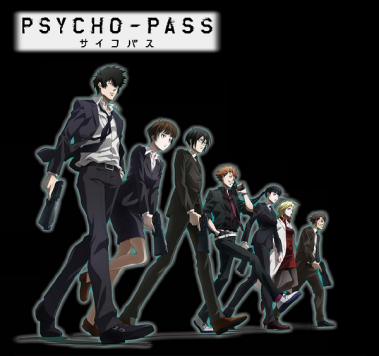 Urobuchi Gen, noitaminA, Production I.G and other big names? Will it be Guilty Crown 2.0 or something that is genuinely good? For some reason I feel very skeptical about this one. The plot sounds like it might be complex (and interesting), so I wonder how it will play out.

Gosh, studio Production I.G and the timeslot noitaminA are so lovey-dovey that they have teamed up for two full anime seasons with two series. This one is based on a Visual Novel by the company behind last year’s famous Steins;Gate: 5pb..

But before you forget, let me remind you that they were also responsible for Chaos;Head, an anime that was not as well-received. Now they will have to prove themselves if they are actually able to create good stuff, or if Steins;Gate merely was a fluke.

There are ten new series from this season I will definitely watch, plus two more carrying over from the last season. This means I will watch twelve series. And I might pick up even more. Overkill indeed.