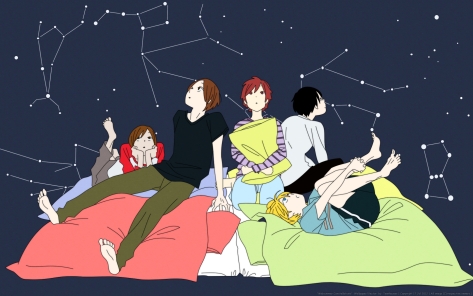 Last year we had Kimi to Boku, something as unusual as a slice-of-life series about boys, and not girls, doing absolutely nothing except living their lives (or, cute boys doing cute things). With no real expectations, especially since it was done by the hit-or-miss studio J.C. Staff, it completely caught me off-guard and blew me away.

For starters, it was a rather fresh take by having boys instead of girls as the main group of characters. Secondly, it actually portrayed boys as being gentle and caring in a natural fashion, something I have rarely seen in anime before (it is usually only wimps, tough ones and idealized pretty-boys I see). It was never over the top or anything like that and it was, for most of the time, believable. Finally, it was also a great romance series. So good I would call it one of the best in that area, which comes down to the fact that it is realistic.

Kimi to Boku also has an overload of cats for some reason, which is always a good thing.

So believe me when I say I was a happy person when I learned how Kimi to Boku 2 would air shortly after the first season (a split-cour, it seems). The sequel continued along the same path as the first one and further developed the relationships between our five main boys and their love-interests. It truly showed how painful love can be and how hard it is to truly connect with the girl you love. How many anime have done this? I cannot think of any.

Kimi to Boku is by no means perfect, there are a few areas it could improve upon (such as having more serious/dramatic moments), but it remains as a unique take on boys in anime. 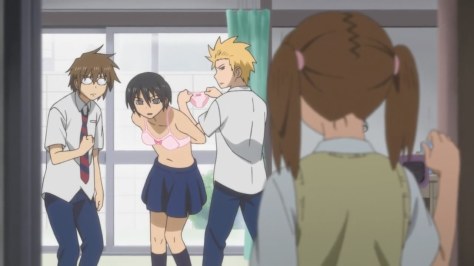 Another anime featuring boys this year was Daily Lives of High School Boys, or Nichibros for short. While this was basically a comedy series, with hints of satirizing anime at times, it also had boys being boys. They were silly, crazy, bros and acted as how you would expect boys to do (from a gender stereotypical perspective, that is). Once again, this is something we do not see often in anime. Fooling another person to dress in girl clothes? Doing voice-overs on people in the distance? Sacrificing yourself to keep your bro from humiliation?

Not only were Kimi to Boku and Nichibros good anime by themselves.

They were also a fresh take on boys in anime.